If you're thinking of proposing in London, then Tower Bridge has probably crossed your mind.

We think Tower Bridge is the perfect location for a marriage proposal, here's why..

Why Choose Tower Bridge For A Marriage Proposal?

Built between 1886 and 1894, Tower Bridge crosses over the River Thames, and has become an iconic symbol of London in that time. It's a must see landmark that hosts 1000's of proposals every year.

Yes it's iconic, but did you know that you can hire the walkway at the top of Tower Bridge for a secret proposal?

There's nothing worse than an onlooking crowd when you're trying to compose yourself to say the right words. The Proposers and Tower Bridge partner together to create amazing private proposals, so that we can make it about just you and your partner.

3. It can be tailored to you

Being private means that we can get more creative. The walkway can be decorated in any way you like, with anything from romantic rose petals and candles, to something more personalised, like this tea cup proposal.

4. Amazing photos inside and outside

First you can get amazing photos inside the Tower Bridge walkway as you go down on one knee and once your beautiful partner has said yes. Then we can head outside for a London themed photoshoot with Tower Bridge making for the perfect backdrop.

It's the ultimate surprise when your partner thinks they're going to the top of Tower Bridge to see the view of London, only to realise that the whole walkway has been decorated for them. You can also "disappear of to the toilet" for a minute, and then meet your partner back on the other side to propose, once they've realised what is happening.

When Okkes came to us to help plan his proposal, he was certain on 'popping the question' in Tower Bridge as this was a special and meaningful place to him and Nergiz, his beautiful girlfriend.

Okkes told Nergiz that they were attending a surprise birthday party for their friend at Tower Bridge, so she didn't suspect a thing!

The ' birthday party' obviously wasn't what Okkes had planned, but in fact she would actually be attending her very own proposal! However, not everything was a lie.

Okkes did actually arrive with all of his friends! They all hid behind the curtain at the opposite end of the walkway, excitedly waiting for Nergiz to arrive!

As she arrived, she was completely surprised to see the most beautifully decorated walkway and a musician performing 'their song' - 'All of Me' by John Legend. 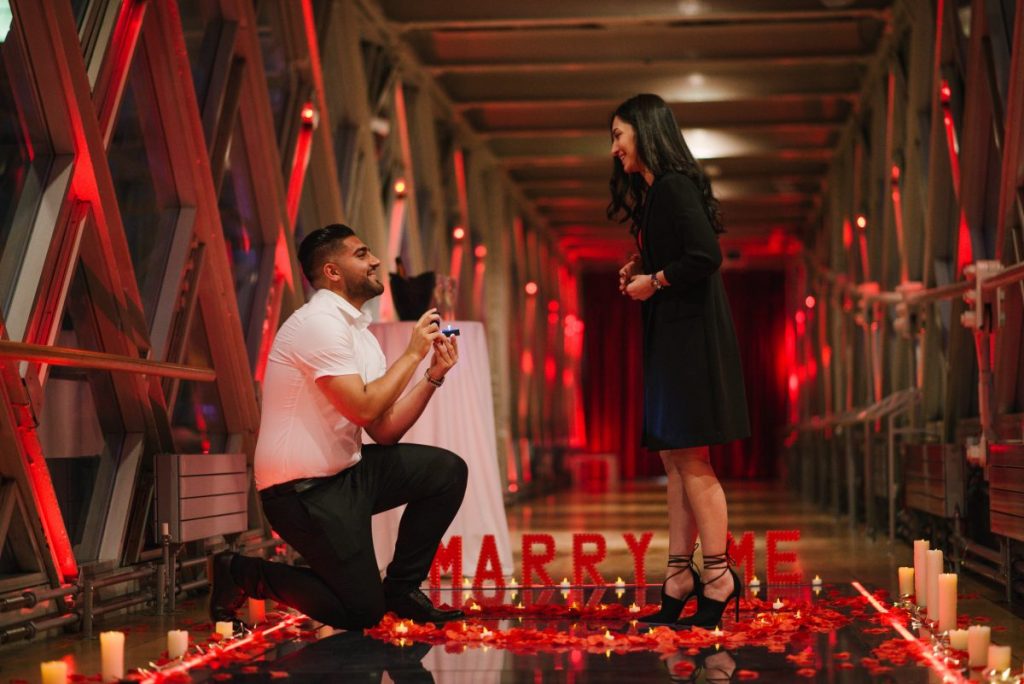 She walked down the walkway and opened each canvas one by one. These were personalised with their happy memories since the day that they could remember! The final canvas was a photo of the happy couple standing in front of Tower Bridge!

As Nergiz unwrapped the final canvas, Okkes reunited with his one true love and popped that very important question... WILL YOU MARRY ME?

But the surprises didn't stop there... out the came all of their friends cheering and congratulating the newly engaged couple!

You can take a look at Okkes & Nergiz proposal video below!

The Proposers know all there is to know about proposal planning with over 1,500 proposals planned across the world, and a 100% YES rate!

Want us to help you to propose at Tower Bridge or somewhere else you have in mind?